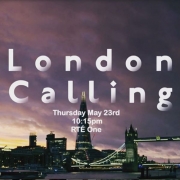 Eoin Burns joined PJ Coogan on The Opinion Line on Cork’s 96FM to talk about our new documentary London Calling.

Below is a full transcript of the interview. You can also listen back to the show here.

Don’t forget to watch London Calling on Thurs 23rd May at 10:15PM on RTE One!

PJ: So, you have really impressive qualifications and, as you can see out the window here, the construction industry is thriving in Ireland again now. But you can’t get work here. Is it that employers can’t see past your deafness? Is that what it is?

PJ: To a layman like myself, it would appear that having an engineer that can’t hear anything, might be a problem on a busy construction site. Are there things you need to help you to work?

EB: That’s a good question. Really just because I’m Deaf doesn’t mean that I can’t work. Because I’m a Deaf person I have a very strong visual sense and that compensates. Sometimes the word ‘deaf’ is misleading to be honest. It doesn’t mean that I’m stone deaf. I use my hearing aids to hear. I can hear beeping, like if a truck or whatever is reversing. I can hear that. And before I start a job we always have a safety briefing as well. So I know the drill, do you know what I mean?

PJ: So how different is it to the situation here? How quickly after you went to the UK were you actually able to find work?

EB: Emm… It was easier, and I felt that there was a big difference. Like when I was looking for a job and I was looking online, at companies’ websites and that, I could see these ‘two ticks’ that were on the website and that means that the company is certified to be inclusive, so that means there are no barriers.

EB: The company I’m working with now is very inclusive and I could see this ‘two ticks’ symbol on the corner of the webpage, which meant that that company was certified to be inclusive, etc. And that company had three stages for interviews. The first stage would have been a telephone interview and I said to the company where I work at the moment, I said to them ‘I’m Deaf’, and they said ‘Oh that’s no problem. Come over, fly over. We’ll pay for your flight.’ And that’s what happened. I’ve had to fly over to other companies for ‘telephone’ interviews, even though… I had to be physically there and I had to pay for the flights myself. Most of the companies are much more inclusive.

EB: It’s the polar opposite to what we have in Ireland. We don’t have any scheme like that here. And I’m gutted for Deaf people in Ireland, and people with disabilities as well, because they need those kinds of supports…

PJ: Sorry to interrupt. How does it work? You need an interpreter all the time. How is it organised?

EB: It’s very simple. I look at my upcoming meetings, and then I identify which meetings I’m going to need an interpreter for, or an electronic notetaker. And then what I do is I contact the interpreters and the notetakers directly and I ask them if they’re available. And I sign a booking form and then the company pays for that afterwards, and then I claim back the funding from the government. And it’s all paid for; we don’t pay a penny towards it. And it’s extremely fantastic.

EB: Because I work in London – it’s a global city, like, there’s 8 million people there – so there are plenty of interpreters. At the same time I can see your point. I have to be proactive, so I have to look in advance and then sometimes if there is a last minute meeting I’m able to get interpreters sometimes and sometimes I’m not. So it’s kind of luck of the draw. So if it’s short notice, it depends.

PJ: And your employers are quite happy to allow you keep… book stuff in advance, and they’ll work your schedule around for you?

EB: Well, I suppose it’s just normal stuff: sometimes meetings get cancelled, and sometimes the meetings get moved. And I’m able to make those adjustments to suit the interpreter. My employer knows that; they’re aware of the logistics of organising that.

PJ: Now if you had to do the same thing here, Eoin, would you be able to do it? Would there be the availability of interpreters for example?

EB: Well, there probably would be interpreters available, the big question is who would pay for it? That’s my big question. I mean, it’s proven to work in the UK and it’s worked in the UK for so long and the quality of Deaf people has proven that it can work. What more convincing do the authorities need in Ireland?

PJ: If you had to use, say, another public service in the UK, like if you had to go to hospital, for example, would you have an interpreter there?

EB: Absolutely. When I book an appointment, there’s a form that asks whether I need support or not. Or the person behind the counter might ask me ‘Do you want an interpreter?’, and then I’m like ‘Yes or no’. But I just kind of laugh at how easy and how good it is. And here in Ireland it has happened once or twice before, credit to the public authorities here, but in the UK, it’s mainstream and it’s by default.

PJ: In other words it doesn’t cost them a second thought; this is how they work.

EB: They’re just aware that it’s there. And they’ve got… BSL is recognised over there, and that contributes to the attitude. I’m very encouraged to see ISL recognised here in Ireland in the last couple of years. So, I have a feeling and a big hope as well that the tide is turning and that we can replicate and study the UK model.

PJ: But we need to come so much into the present day. We are very much behind, aren’t we?

EB: Yes. I feel like we’re treated like third class citizens. And I don’t understand why that is. We’ve been through the education system, we’ve proven that we can match our hearing peers, and then when it comes to the workplace, all our hard work… you know, we just meet with a wall after all that hard work. So the government needs to knock down that wall.

PJ: Clearly this documentary, London Calling, is a very important piece of television, and you’d like everybody to watch it, right?

EB: Yes, please, please yes. It’s great… like, I don’t want a ripple effect, I want shock waves. It’s the time for everyone to smell the coffee. You know, it really is a no brainer. So I don’t know what’s stopping us from doing it.

PJ: Well Eoin, thank you very much for coming in today. Thank you Suzanne for your translation and your interpretation. And I wish you the best of luck in your career. I hope… I’m sure that one day you hope you’d be able to move home and work in Cork at the same level.

EB: Hopefully. Yeah. Thanks very much.