Brendan O’Connor’s Cutting Edge is back

Brendan returned to screens on Wednesday 19th October following the success of our five-week run earlier this year. Each week Brendan and three panellists cut into the week’s news from Ireland and around the world, in the style of a darkly comedic post-mortem.
This week he was joined around the table by presenter and author Norah Casey, veteran broadcaster George Hook, and writer of the new RTÉ hit series Can’t Cope, Won’t Cope Stefanie Preissner. Things got heated with topics ranging from the American Presidential election, the Ched Evans rape case, Kim Kardashian, breastfeeding, death and burials and the new Visit Dublin slogan.
Twitter lit up, with #cuttingedge trending number one in Ireland. Viewers were particularly taken with the spectacular range of Stephanie Preissner’s facial expressions as she listened to George Hook. 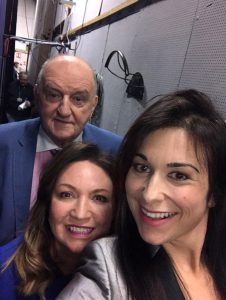